Inside a barn and scattered among discussion Monday, about 75 farmers and ag leaders applauded the Tudor Dixon dialogue, most of which centered around the current administration’s “target” of Michigan farmers. Dixon and incumbent Gov. Gretchen Whitmer will face off in the Nov. 8 election. Image credit: Mitch Galloway, Michigan Farm Bureau; Video by Ian Kast, Michigan Farm Bureau

Inside a barn and scattered among that discussion Monday, about 100 farmers and ag leaders applauded the dialogue, which centered around the current administration’s “target” of Michigan farmers.

“We've reached out over and over and over with the current administration to address issues and have been turned away,” Bednarski told the Swisslane Dairy Farms Inc. crowd. “It's great to have a fresh person there that’s taking the second largest industry in the state and recognizing it for what it is.”

According to Bednarski, Michigan farmers faced multiple government-related issues in recent years, including the forced closure of Michigan greenhouses, mandatory COVID testing for farmworkers, and overreaching permit changes for the livestock industry.

“No matter where I go, I have farmers tell me that we are under attack in a way that we have never felt before in the state of Michigan,” Dixon said. “And here's their statement: ‘If I were like any other business where I could get up and go into a new building or state, I would get out of here.’”

Dixon said this shouldn’t be the norm and promised to lower state-based farm regulations by 40% in her first four years. Current fine processes are enough to make dairy farmers leave, Dixon added.

“It's shocking to me,” she said. “That's not even in the pandemic; that's every single day how our ag industry is being treated. We were in Grand Rapids a few weeks ago talking to a greenhouse about them being shut down during the pandemic.”

That farm family told Dixon they’d never throw away the letter threatening them with jail time if they continued curbside delivery.

“You could get marijuana curbside, you could get alcohol curbside, but you couldn't go to a greenhouse,” said Dixon, adding the Whitmer administration’s created a “gotcha state,” one where agencies cite various businesses before shutting them down.

Hernandez grew up in Croswell.

He remembers fondly the smell of sugarbeet harvest, one of Michigan’s top crops.

“Agriculture is such an important part of my life,” Hernandez said.

Dixon and incumbent Gov. Gretchen Whitmer will face off in the Nov. 8 election. 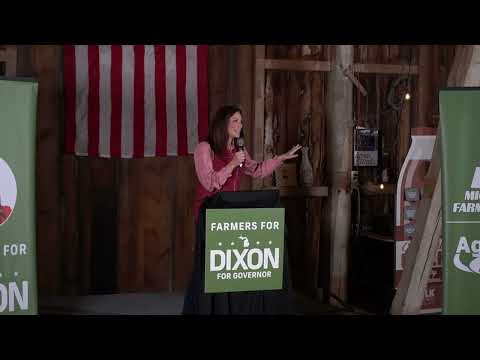 There’s plenty of time to request and complete an absentee ballot for the Nov. 8 general election.

Michigan Farm Bureau encourages members to review who will appear on their Nov. 8 ballot by visiting their easy-to-use candidate locator.

In the remaining months leading up to the November general election, I encourage you to become actively involved in supporting Tudor Dixon’s campaign…